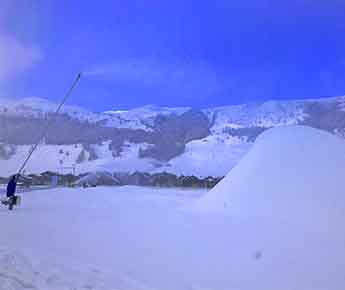 This trend is expected to increase under climate change, with expected fewer and weaker snowfalls. Optimizing snow management, and in particular snowmaking, is a major challenge for ski resorts. Currently, the required water volumes are often estimated before the snow season and based on general information, such as the worst encountered snow season in the past, with only one or two decades of historical hindsight. Making a decision on whether snowmaking is turned on, or off, on a given day, mostly depend on the meteorological conditions of the day. This lack of anticipation can have negative consequences, both in economic terms (premature melt of the snow produced, overproduction, inadequate grooming frequency ...) and ecological, not to mention the quality of snow on the slopes and the satisfaction of skiers.

Can we hope to do better by exploiting the available meteorological information ? The project PROSNOW, coordinated by Météo-France and bringing together 12 European partners, takes up the challenge. It aims at developing a decision making service for ski resorts, based both on meteorological (several days) and seasonal (several months) forecasts. This new tool will provide forecasting information that can be used by ski area operators (eg snow depths / heights), together with precise information on the uncertainties affecting them. Eight pilot stations in the Alpine Arc (France, Italy, Austria, Switzerland, Germany) will contribute to the design of the service and will test the demonstrator. The kick-off meeting of the PROSNOW project is held in Grenoble from 27 to 29 September 2017 in the presence of all partners.

Launched in September 2017, the PROSNOW project will last 3 years. It was framed in response to the European Commission's call for tender Horizon 2020 (H2020) "Greening the economy", associated with the societal challenge 5 "Climate action, environment, resource efficiency and raw materials", with research objectives addressing the market for climate services. In addition to the latest generation weather forecasts, the project will also rely on new seasonal  forecasting services developed at European level under the Copernicus Climate Change Service (C3S) program.

Behind PROSNOW: the scientific challenges

The developed tool will be designed for end users and will not merely aggregate scattered forecast information. Its design therefore requires several scientific challenges:

- The results will have to be formatted in order to be directly usable by the users: they will thus present predictions of heights or stocks of snow, which requires finely modeling the snowpack on track
- In order to anticipate production as closely as possible, the resorts will need precise information on the uncertainty of the forecast and the expected impact of operational decisions taken at various times of the season
- Forecasts will have to take account of the local conditions of the resorts, using in particular unconventional data such as the meteorological data associated with the snow guns, measured snow depths on the ski slopes, satellite images of the snow cover etc.

Météo-France coordinates the PROSNOW project, which also brings together:
- TEC Conseil, which contributed to the emergence of the consortium and the project,
- several partners from academic world, which are leaders in Europe for snow and mountain topics: SLF Davos, Switzerland, University of Innsbruck Austria, University of Vienna BoKu Austria, EURAC Bolzano Italy,
- several academic partners specializing in the socio-economic context of the tourism industry (Irstea Grenoble, France, Joanneum Research, Austria),
- several partners in the industrial sphere, which already provide technical solutions for the production and management of snow (TechnoAlpin, SNOWSAT, CGX AERO, Dianeige, AlpSolut). 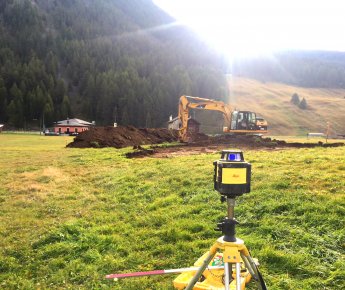 News / 26.09.2017
TRACK&FIELD : WORK IN PROGRESS
The works for the new Track And Field just started in Livigno.
READ