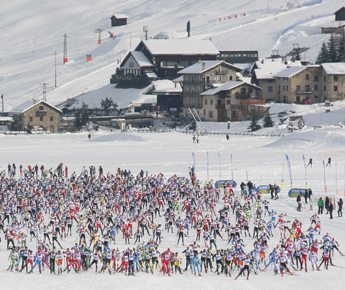 The long distance ski championship, Visma Ski Classics, continues its market growth. The new calendar for the upcoming 2016/2017 season, Visma Ski Classics VII, will include five new event destinations in Switzerland, Austria, Norway, Finland and China!
Visma Ski Classics now consist of the world´s 13 most prestigious cross country ski events, unique in having both the 28 Pro Teams and more than 50.000 amateurs on the same start line, also male and female skiers compete together.

Visma Ski Classics VII will start off with an individual prologue in Pontresina Switzerland on November 27th. An individual prologue is a new initiative since last year´s tour started with a Pro Team Tempo prologue. New this season is also that the Prologue will give both Pro Team points and Individual points. The weekend after, on Saturday December 3rd, the 35km La Sgambeda in Livigno Italy takes place as in past seasons. The first two events are both on high altitude of about 2000 asl making them extra challenging.

The third event in Visma Ski Classics VII is in Changchun China, where the 50km Vasaloppet China takes place on January 4th. This is the first time that the tour leaves Europe. Changchun is an industrial megacity in northern China, the event takes place in the national park famous winter time for the amazing snow sculptures built around the event finish.

After China the Tour flies back to Europe and Kaiser Maximilian Lauf in Seefeld Austria, the event was part of last year´s calendar as a late replacement to a cancelled event. This year the event will have a complete new course over 60km with start and finish in the picturesque city of Seefeld.
- For Seefeld the Kaiser Maximilian Lauf is a step into the Nordic future and the possibility to demonstrate that we are the best cross country destination in the Alps. With Visma Ski Classics we have an experienced partner on our side for the organisation of long distance races.  In 2019 we will also host the Nordic world championship in Seefeld. We are looking forward to a long and successful partnership with Visma Ski Classics, says Markus Daschil Viceman of the tourist board and Nordic group coordinator in Seefeld.

Then Visma Ski Classics continues with well-known events in the order of: La Diagonela, Marcialonga, Toblach-Cortina, Jizerska Padesatka, Vasaloppet, Birkebeinerrennet and Årefjällsloppet. New is that the Czech event Jizerska 50 moves to mid February in order to get better snow conditions. Årefjällsloppet will this winter take place on Sunday 26th of March, but it is not the final event in Visma Ski Classics anymore, there are two new ones...

On April 1st the new event Reistadløpet takes place in the stunning mountainous fjordlandscapes  of northern Norway, a 50km course with start in Setermoen and finish in Bardufoss. Reistadløpet has been organised for over 50 years to the memory of the Norwegian legendary military Ole Reistad. The area surrounding the race hosts one of the most important military bases in Norway, it is also famous for the Arctic Race in cycling.
- The Reistadløpet organisation is very satisfied becoming a part of Visma Ski Classics. This is exactly what we need in order to bring our event in northern Norway to the next level. We also believe the fact the race is taking place north of the polar circle on guaranteed natural snow on one of the toughest tracks in the tour will bring a lot of attraction to the event, not the least from us who likes the old traditional type of cross country skiing, says Jørn Erik Berntsen CEO Reistadløpet.

Then the Visma Ski Classics VII moves to Finland for the new final event Ylläs-Levi in Lappland. The final will be 55km with finish on the main street of Finland´s biggest alpine resort Levi. Ylläs-Levi area has 550 km well-prepared tracks and a snow guarantee seven months per year. With the help of Kittilä airport it is very easy to come and to then stay as the area has more than 45 000 beds and wide range of services. Levi Events, the LOC party, has a lot of experience of hosting international events such as Alpine World Cup Levi.
- We are extremely proud to be a part of Visma Ski Classics family and believe that having a final event at Ylläs-Levi area will help us to reach our future goals in becoming the largest cross-country tourist area in the northern Europe, says Janne Pelkonen, CEO at Levi Events.

Visma Ski Classics organisation has worked hard in order to develop the season calendar further.
- With five new events the Visma Ski Classics VII stands for the biggest leap in the history of Ski Classics. Going to China is an important step since we want to be an international tour present around the globe. China is an extremely interesting market for sport business in general but also for winter sports specifically, since they are preparing for the 2022 Beijing Winter Olympics, and the Visma Ski Classics event in Changchun will be part of their preparations. The event in Seefeld, Kaiser Maximilian Lauf, was developed already last winter when the German event was cancelled due to lack of snow, it will now formally be part from the VII season. Seefeld is a fantastic resort for cross country skiing and I am sure it will be a very popular event for the amateur skiers, says David Nilsson CEO Visma Ski Classics he continues:

- Finally we have two new events in the very north part of Europe around the polar circle. Reistadløpet close to Lofoten in northern Norway and the final event Ylläs-Levi in the Finnish part of Lappland. These events will both show up amazing nature images as well as they also give the tour safer snow conditions, in the beautiful spring lights that only this part of the world can offer. Now we can barely wait until the season kicks off in Pontresina with the Prologue, but stay tuned for more interesting news will be coming out... says David Nilsson CEO Visma Ski Classics 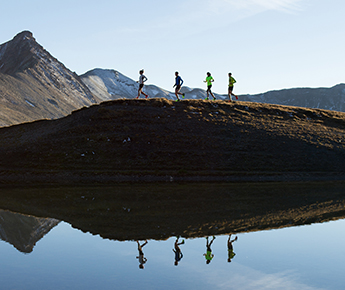 News / 23.05.2016
LIVIGNO FOR RUNNERS
Alpine meadows in bloom, a temperate climate, glimpses of snow on the surrounding peaks: what better way to welcome summer and join fellow runners than to descend on Livigno to partake in a weekend of incredible events? ‘Little Tibet’ has well and truly unlocked its treasure trove of trail running mania.
READ