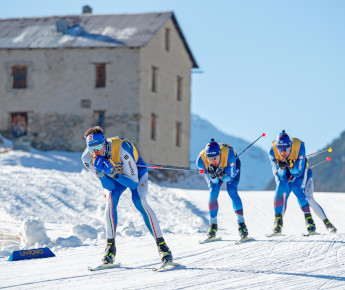 Livigno opens the winter season: between cross-country, alpine and combined ski it is immediately a parade of stars. The Valtellina resort welcomes the stars of the winter with 50 centimeters of snow, the perfect way to warm up the engines in view of the opening to the public.

"Me like Livigno": this was the funny copy of Jo-hannes Hosflot Klaebo's post that recently went viral online, in which the Norwegian cross-country champion celebrated his love for the Little Tibet. Arrived in Livigno for an important pre-season stage, the Viking's national cross-country team joined the large group of high-level athletes and national teams that could take advantage of the traditional early kick-off offered by the Valtellina resort.

A welcome extra, that makes the Livigno landscape even more fascinating, and that allows the athletes to have a taste of real snow well in advance compared to the times foreseen by mother nature. Well before the official date of opening of the facilities to the public, this year officially fixed for November 27th, it is in fact possible to spy the great interpreters of the winter disciplines while they train on the slopes of Livigno.

The first to reach our mountains were some of the world's best cross-country skiers, for whom the slope can already be said to be almost complete, thanks also to the copious snowfalls that welcomed the athletes when they woke up. More than 50 centimeters of snow and a completely white horizon give a magical touch to the village and offer the full feeling of a winter that has arrived quickly, and for which one could not wait.

They were also joined by some big names in alpine skiing, who opened the dances together with Klaebo and his companions. In particular, the most relevant names from an international point of view, are those of Henrik Kristoffersen, also Norwegian, of the Croatian Filip Zubčić, and of the Slovenian trio composed by Kranjec, Haddalin and Rob-nik, all expected to achieve important results.
In a season that will be Olympic, with the appointment of Beijing 2022 in February, the last edition before that of Milan Cortina 2026 in which Livigno will be a great protagonist, nothing can be left to chance, and many of the protagonists expected to great exploits in the Five Circles have chosen the Piccolo Tibet to fine tune their preparation.

In addition to cross-country skiers and alpine stars, many athletes of biathlon and Nordic combined have already arrived in the valley, among which, in this case, we find also our national team. And the list is destined to grow very quickly.
Already during the week, for example, there was the arrival of a quartet of first class Italian skiers, led by the experience and charisma of Marta Bassino, by now at home in the Livigno mountains. Also present with her were the promising Anita Gulli, Sophie Mathiou and Roberta Midali.

The girls' group was joined by the big men's teams, with the FISI World Cup slalom and giant slalom teams testing the slopes. From Alex Vinatzer to Giuliano Razzoli, from Luca De Aliprandini to Manfred Moelgg: the best of the Italian technical disciplines is already at work on Livigno's snow. All the alpine skiers are training on the "Li Zeta" slope of the Sitas company, opened at the moment exclusively for them.

This continuous flow of great athletes, as well as certifying the quality of the structures of the Little Tibet, is also a real seal of guarantee for all the fans, who will soon be able to enjoy tracks and trails whose beauty are the forerunners of some of the most important athletes of the entire circuit. 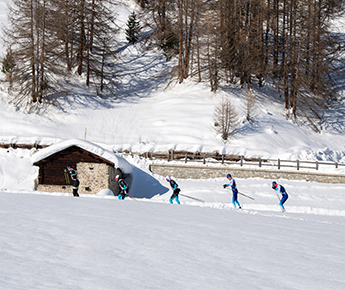 News / 5.11.2021
LIVIGNO WITH SNOW. ALSO MARIANNA LONGA WILL BE AT THE START.
First snowfall in Livigno that makes us hope for a "white" winter. The slope, initially realized with snow-farming, is now longer. Still 100 bibs for the La Sgambeda of 4 December, Marianna Longa has registered a place in the grid for the 35 Km TL
READ