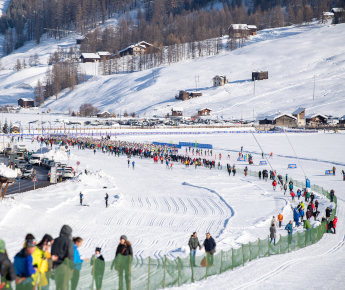 More and more people are signing up for the first cross-country skiing competition of the yearLivigno’s organizer set a limit of 500 people. From Saturday 23, participants can train on the snow farming ringThe superstar Klaebo is back in Livigno to prepare his Olympic season on high ground

From Pauli Siitonen - the Finnish with the intuition - to Bill Kock - the American who developed the new technique in the 1970s. Skating is a very loved, bubbly and explosive discipline.The Sgambeda is the first chance of the season to put on your narrow skis and race against the clock with a free technique; it will raise the curtain on its 31st edition on December 4. This year, the organizers of the Livigno competition set some boundaries, because the pandemic - although currently contained - is still to be feared. Therefore, they set a limit of 500 participants, and, as always, the imperative is crossing the finish line. Many international athletes have already booked a race-bib: five hundred, cinq cents, fünfhundert, with a maximum of 500 participants.

Although there is still time before December 4, you should start polishing your skis, because from Saturday (23 October) onward, you can start training on the first ring section obtained in Livigno with the snow farming technique. Amateurs who want to challenge their passion on narrow skis will have the ring at their disposal between noon and 6:30 pm, after getting a ticket at the cross-country ski centre.

Livigno’s “plateau” is favourite place for altitude training for many athletes, and for cross-country national teams in particular, at this time of the year; with the opening of the training track, the members of the Finnish national team - guided by superstar Johannes Høsflot Klæbo - and of the German biathlon team - familiar faces in Little Tibet - have already been announced.

Training and spending a few nice days in Livigno is an enticing idea, without though losing sight of the Sgambeda’s 500 participant limit, which is quickly reaching its target.

Although it is true that the tendency is to wait the last second to enter a competition, the saying “There is no time like the present” rings very true in Livigno; so, in order not to be out of the group of 500 lucky skating participants, you better hurry.

The race track is the traditional 35 km one, with start and arrival at Livigno’s cross-country ski centre, the climb toward the Forcola pass in the shadow of the Vago Alps, and then downhill toward Livigno’s centre. As always, the Sgambeda starter package will be top quality, and it will be revealed soon; the true “prize” is the chance to ski at the beginning of December in a place where usually snow holds sway, and where elsewhere it is very hard to find any centres open.

In Livigno, altitude skiing is a pleasure and a qualifying way to open the cross-country ski race season, which will continue in January in Italy. At the beginning of December, Livigno sparkles with lights and colours, the Christmas atmosphere is everywhere and the time of giving is anticipated - like the skiing season. 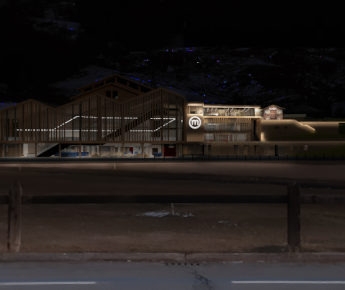 News / 15.10.2021
MOTTOLINO FUN MOUNTAIN: THE FIRST PRIVATE OLYMPIC...
The ski area leads the way in Italy by inaugurating the first private work linked to the 2026 Winter Olympics. The Service Center, with an investment of 10 million euros, will be inaugurated in December and will offer various services in addition to those related to skiing: on the first floor there will be a Digital Cave with mountain views, modular spaces and mobile workstations, perfect for smartworking, gaming, streaming. Innovation also in the field of catering, with the Kosmo Taste the Mountain - Livigno & AlpiNN inspired by the mountain cuisine of Norbert Niederkofler.
READ