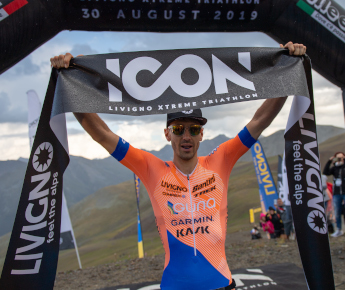 From dawn to dusk: Livigno enchants the King of Icon, the most extreme triathlon race in the world

On September 3rd, 350 athletes from every corner of the planet will compete on a tough course in the breathtaking scenery of the Little Tibet.

Also this year Icon, the great event organised in Livigno and dedicated to the lovers of extreme triathlon, will be completely sold out. A very technical and spectacular course will be waiting for them in the Alps.

The start before dawn, scheduled in the dark at quarter past five on the shores of the lake, will immediately put the athletes' resistance to the test, with its 3 kilometres and 800 metres of swimming to be completed in the shortest time possible, right in the waters of Livigno's artificial lake.

Following this, the challengers will tackle the bike section, which is one of the toughest and most challenging on the international scene. In addition to the 195 kilometres in length, there will also be a total of 5.000 metres in altitude, taking the participants to some of the best known and most fascinating peaks in the Alps.

You will climb, in order: the Forcola, the Bernina and the Forno passes. Then you will continue up the Swiss side of the Stelvio and, finally, you will complete everything with the Foscagno pass. Almost two hundred kilometres of absolute effort, crossing the panoramic locations of the valley and putting hairpin bends behind, to reach the partial finish line in Trepalle.

There, they will find the start of the last fraction, the 42 kilometre marathon, which will pass through wooded paths and the centre of the village, to conclude again in the highlands, climbing up to the 3000 metres of Carosello 3000.

A hard and difficult course, which presents several technical criticalities and which has tickled the fantasy of many athletes, who will reach Livigno from every corner of the Planet. Among them there will obviously be Giulio Molinari, Livigno's adoptee, who will act as host. Giulio participated in the 2019 edition, which he won by setting a course record of 12 hours and 36 minutes: an extremely ambitious limit, which the participants of the 2021 edition will try to match.

For the occasion, Molinari will be back in the race, also carrying out the charity project "Hour Icon" in favour of the non-profit association "Il sorriso di Car-lotta". The home champion will start one hour after the official start and for every athlete he manages to overtake he will donate a budget to the Association, always increasing as he gets closer to the best. A noble aim, which fits well with the personality of the Li-vigno Team athlete and with the nature of an absolutely unique event.

"Icon is much more than an extreme triathlon race. Anyone who has done it knows that. Of course the design is very technical, one of the hardest and most complicated in the world, but at the same time the beauty of the places crossed, the night swim and the roughness of the course make you face a real inner journey as well as physical. And this year, for me, it will be even more so.”

The appointment is for September 3rd to crown the new king of Icon together. 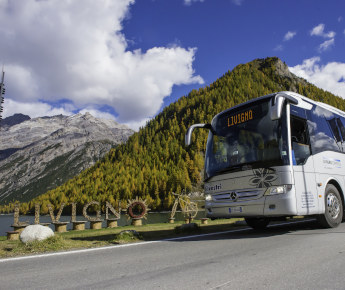 News / 10.08.2021
LIVIGNO IS ALWAYS GREENER: IT STRENGTHENS THE TRANSPORT...
Little Tibet is at the center of a sustainable mobility model aimed to encourage the use of public transport for both incoming and outgoing visitors, thanks to new infrastructures and reduced fares on routes that connect the resort with Lombardy and Switzerland, as well as locally, with a free and efficient local level, with a free and efficient transport network.
READ