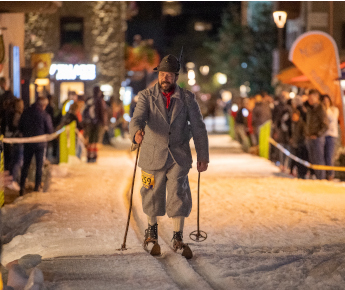 An event awaited by livignaschi and international tourists, who cheered  enthusiastically the contradaioli in the race.  The Gara da li Contrada da Livign, preceded by the competitive 1k Shot competition, confirms itself as one of the most eagerly awaited events of the year, both by Livignaschi and tourists from all over the world who stay in the Little Tibet on the occasion of the race, discovering and appreciating the local traditions.

The 2022 edition was one of the most heartfelt and well-attended in the last 10 years. A large public supported the contradaioli in the race and animated the streets of the pedestrian centre where a cross-country ski track was created with real snow, preserved using the innovative snowfarming method, which involves the use of thermal sheets that protect the winter snow from summer temperatures, preventing it from melting. At 8.30 p.m., the traditional cross-country skiing competition kicked off, with 463 people from Livigno - a hundred more than in the last edition in 2019 - competing as representatives of one of the eight 'contrade', with the aim of helping to achieve the title of 'Best Contrada' of Livigno.
The race was preceded by a parade of conscripts who carried the contrade banners and torch along the race route, handed over to the mayor together with Don Gian Luca, who gave the blessing of the race. These are the districts in the race: Centro, Comunìn Pemónt, Fórcola, Ostarìa, Plàn da Sóra, Saròch, Teòla and Trepàll. Among the competitors, some of whom competed in period clothing and equipment, mention must be made of the five athletes who have taken part in all 40 editions of the historic kermesse: Epi Bormolini, Dario Cusini, Adriano Mottini, Oreste Rodigari and Gabriella Gurini. The latter, born in 1941, together with Dr Gian Battista Ceresa, born in 1936, were the oldest at the start. They were counterbalanced by the very young, class of 2013, Austeja Pedrana, Elia Galli and Cristian Panizza.  This year the winning contrada was Teòla, followed by Comunìn Pemónt and Saròch.

Among the men, Simone Urbani of the contrada Centro stood out, who earned the top step of the podium with a time of 1:14.74, ahead of Nicolò Cusini of the Livigno Team and Thomas Bormolini. The women's winner, on the other hand, was Veronica Silvestri of the Livigno Team, who was competing for the Comunin Pemónt contrada: with a time of 1:34.98, she beat former Azzurra Marianna Longa and Lucrezia Galli by a hair's breadth. Don Stefano Ferrari, Don Rocco Nesossi and Don Natalino Pedrana also participated enthusiastically and competitively in the competition, enjoying themselves together with their fellow citizens on this day that gave a foretaste of the upcoming winter season: in mid-October, in fact, the cross-country skiing track will open, while the alpine skiing season will begin at the end of November.

Also during the month of November, the 30th edition of La Sgambeda, the important cross-country ski race on the Visma Ski Classics calendar, will also take place. The organising committee and volunteers have been rewarded for their excellent work: once again this year, the Gara da li Contrada da Livign was a great success, involving and entertaining young and old, locals and tourists alike.

Yesterday evening also saw the conclusion of the third summer edition of the Ragazzi On The Road initiative, the socio-educational association, chaired by Egidio Provenzi, which aims to bring teenagers (aged between 16 and 19) alongside police forces and rescue workers: an experience to raise awareness of the dangers of the road and provide concrete and effective education on legality. The young participants, after an operational week alongside the institutions, served together with the local police of Livigno's Commando in the Gara da li Contrada da Livign. Mayor Remo Galli and Cristina Rupani, Councillor for Personal Policies, Education and the Solidarity Community, congratulated the young people who took part in the initiative, thanking them for their work during the week of 19 to 25 August and confirming their willingness to continue their collaboration with this important initiative. 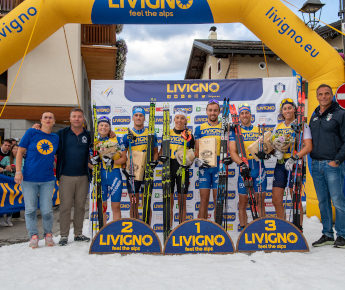