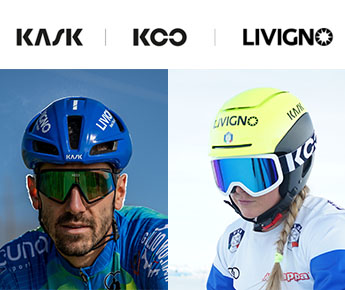 Many are the points in common of the two realities that signed a collaboration agreement to share projects and communication plans in view of the Olympic Games in Milan Cortina 2026, where the little Tibet will host the freestyle and snowboard competitions.

Undisputed protagonists of outdoor sports in the four seasons, Livigno and Kask are authentic expressions of innovative Made in Italy, and the agreement will allow the development of numerous synergies, starting from the sharing of athletes and ambassadors, and among them the first testimonials of the Valtellina resort and Kask, with its brand of KOO glasses, are the Olympic gold medal in snowboard cross by Pyeongchang Michela Moioli and the long distance triathlete Giulio Molinari.

It is an all-Lombardy partnership between Kask, the Bergamo-based company that is a point of reference in the production of helmets for cycling and winter sports, and Livigno, the well-known resort in the upper Valtellina that has become an ideal destination for athletic training at high altitude.  An agreement between two realities of the same regional territory, but which looks beyond the borders of Lombardy, especially in view of the commitment to five rims in six years' time.

With Livigno we have found many points in common, both in the practice of summer sports such as cycling in all its forms, as well as winter sports on the snow: it seemed natural to us to share this spirit, and in particular the values linked to the continuous search for improvement, to style as a distinctive character and to sport as an evolutionary laboratory - commented Angelo Gotti, founder of Kask - and it is from these considerations that we start a common path with our friends in Livigno from here to the Winter Olympics in Milan Cortina in 2026".

Thanks to its 1.800 metres of altitude, the locality of the upper Valtellina can be defined as an open-air gymnasium able to attract sportsmen in winter as well as in summer: here, very often, amateurs can find themselves cycling, running, swimming and skiing alongside the champions of numerous specialities. And the agreement between Livigno and Kask seals what are the common points between the two realities, starting with athletes of international calibre such as the Olympic gold medalist in snowboarding Michela Moioli and the long distance triathlete Giulio Molinari.

In recent years, our resort has carved out a place for itself on the international panorama of destinations with a strong sporting character, and in this sense Livigno has become a credible and authentic vehicle of communication for our partners - underlined Luca Moretti at the head of APT LIVIGNO - and the agreement with Kask is further recognition of this commitment and we are sure that in the coming years we will be able to build numerous synergies that will increase the visibility of both.

Moreover, Livigno is often a training gym also for the Italian Letizia Paternoster, the colour bearer of the women's team Trek Segafredo of which KOO is technical sponsor for the glasses, also for the men's team.

A choice made by two players who can define themselves as reference points in their respective sectors and who represent two expressions of a current and competitive Made in Italy: for Kask and KOO, the sunglasses and ski goggles brand of the Bergamo-based company, the goal is progress in performance, the same goal that is part of the DNA of Livigno's sports offer.

On the occasion of the Winter Olympic Games in Milan Cortina 2026, the snowboard and freestyle trials will be hosted by Livigno, the alpine resort that more than any other has been the cradle of innovation in winter disciplines.

The agreement signed between the company from Chiuduno and the "little Tibet" provides not only for a programme of joint initiatives, but also for the visibility of Kask and KOO at key points in Livigno, such as the pedestrian area as well as other places in the Alpine area. 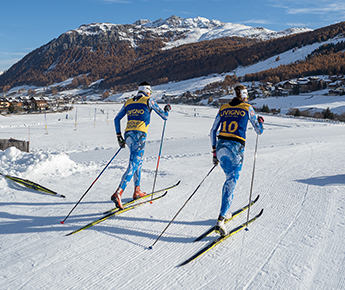 News / 28.10.2020
LIVIGNO, THE OPEN AIR GYM. CROSS-COUNTRY SKIING RING TO...
Livigno, where athletes and enthusiasts flock to prepare for their sporting events. As of 30th October, it will once again be possible to ski on Livigno’s cross-country ring. Sports facility open from 6:30a.m. to 12:00p.m. for athletes, and 12:00 noon to 7:00p.m. for amateurs. Maximum attention is required in compliance with the anti-Covid regulations.
READ