LIVIGNO CELEBRATES ITS OLYMPICS: FROM BEIJING 2022 TO THE HOME EDITION, A JOURNEY THAT STARTS IN PIAZZA DEL COMUNE.

Commemorative plates were consigned to the athletes and technicians from Livigno who took part in the Winter Games, starting the four-year period of Milan Cortina.It was a real embrace between the community and its most awaited protagonists, the one that took place, in the form of a party, in the streets of the city center, on Thursday 24th March 2022.

Around the athletes and technicians who have brought a piece of Livigno to the borders of the World, on the occasion of the Olympic Games of Beijing 2022, the local population has taken the opportunity to make feel to their favorite exponents all the participation and all the love they deserve, after a ride to Five Circles that has made proud the whole country.

Starting with the athletes: Thomas Bormolini, class of 1991, Italian biathlon champion, who completed his second Olympic experience in China; and Jole Galli, rookie of the year in the world ski-cross circuit, who qualified for the Five Circles event at the last minute, almost by surprise, thus accelerating her growth process in a new sport, and allowing a glimpse of important margins for improvement in view of 2026. Also present with them: Rudi Galli, coach of the Italian national alpine snowboard team, Nicolas Bormolini, Italian cross-country ski technician, and Tobia Silvestri, who in Beijing, as in Pyeongchang, participated in the construction of the structures for the freestyle and snowboard slopes. Emil Bormetti and Luca Bormolini, Thomas' brother, technicians of the New Zealand national team, and Fausto Bormetti, technician of the Australian national team, were absent but remembered during the event.

The participants were welcomed by the mayor of Livigno, Remo Galli, who in his welcome speech summarized the social role that sport and its protagonists play for the whole community: "together we have one great goal, which has an ultimate goal: to try to give a better future to young people, to those who must stay in our land. The Games will be a great challenge and opportunity, because we want our young people to stay here to make the mountain live and to help us progress as a community".

A perspective also shared by those directly involved, who were excited by the surprising warmth of the audience. "I see the kids out front, reminding me of my beginnings, the message to them is very simple: you have to always believe, even if things don't come right away, even if they don't come the way you want them to. Beijing has come at the peak of my best season, and it is the result of work, passion, enthusiasm and support of my community" these are the words of an excited Thomas Bormolini. Words echoed by the smiles and thoughts of Jole Galli: "having changed discipline has made me discover new things about myself. I like to do what I do and, in the light of the results, maybe we should ask ourselves why I didn't do it before. A change that was possible also thanks to the support of the Livigno Team and of the whole community, which allowed me to pursue my passions, and to fly to the Games."

An event able, once again, to tell the relationship between Livigno and sport. A connection in continuous transformation, with a strong educational and social impact, and that will live in the next four years a new experience, thanks to the arrival in the valley of the Olympic disciplines and medals. A communion of intentions that can be perfectly summarized in the engraving on the commemorative plates given to the participants, in which the historical Olympic motto, revisited after Tokyo 2020, has been translated into the local dialect, to express the importance of Livigno's cultural heritage in the construction of the next Five Circles event. 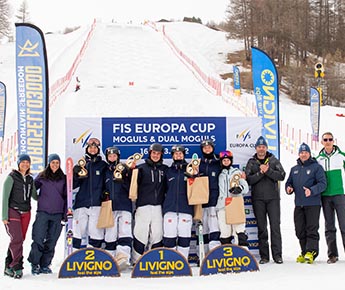 News / 17.03.2022
MOGULS EUROPEAN CUP TITLES ASSIGNED: LIVIGNO OPENS THE...
Last stage of the season for the moguls European Cup and first event organized by Livigno that will host the freestyle competitions also in 2026: a real taste of the Games.
READ