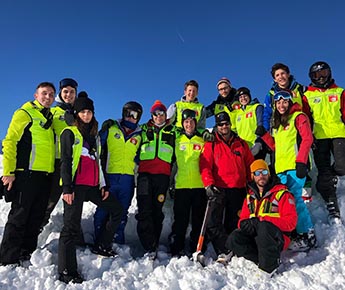 LIVIGNO, MOUNTAIN THAT EDUCATES YOUNG PEOPLE ON THE ROAD AND ON THE SLOPES

Today has ended the project that has deployed 15 students as Local Police, Law Enforcement and Rescuers to prevent directly on the field.

Livigno (SO) January 2, 2020 - A prevention on the field. From December 27 to January 2, 15 students from Livigno engaged “on the road” in a project unique in Italy, to raise awareness of the dangers of the road, the slopes and education of legality, alongside the police and the rescuers.

Full satisfaction and the desire to continue with the project were expressed by the Municipality of Livigno, in the person of the Mayor Damiano Bormolini, and by the Councilor for Social Policies, Romina Galli, during a press conference held this morning in the Council Chamber of the Municipality in which took part the institutions that joined with enthusiasm to the zero edition of the -Winter On The Road-project and the young protagonists who brought their testimony.

The Municipality of Livigno believed and invested in young people to instill awareness and change their point of view by shortening"the distances with institutions and law enforcement agencies.

The results are great, as emerges from the statements of the protagonists themselves: -We are excited we want to discover new things- says Greta, 18 years old. Tommaso, 17, adds: -I have faced situations that will lead me to not get hurt.-

The initiative, with its intent and goal, attracted the attention of the population and also of the media who carefully followed the special winter edition of the project. #Ragazziontheroad- the only educational format of its kind in Italy - has thus landed on the snow to let the young boys and girls live and experience the precious activities and services carried out on the field concerning the typical scenarios of the winter season starting with the Police that, led by the municipal administration, enthusiastically joined and hosted the kids. A concrete experience to prevent and educate and also avoid over the top" behavior.

To understand safety and understand how important caution is in the snow and on the ski slopes, as well as on the roads, the guys on the road have joined the patrols also on board a snowmobile. Not only slopes, but also checks and prevention on the roads. We are really excited to have had the kids on the road with us in this period of great tourist turnout. Especially to make them understand what the Local Police of Livigno are doing both on the prevention and on the road, from the Police in via Borch, led by the Commander Cristoforo Domiziano Franzini.

The meaning of night traffic checks from the words of the deputy commander of the Local Police of Livigno, Christian Bergamo: "To us, I want to say, the salary does not change if we carry out multiple checks: we do it out of conscience. We try to do our job well to avoid that road users get hurt, "he says in a video posted on the Instagram page of Ragazzi On The Road, chaired by Giancarlo Bassi, who proposed the project (which he has already involved in 12 years since his birth over 500 students in the provinces of Bergamo, Brescia and Milan) to which the Municipality of Livigno has joined and which also saw the support of Ci.A.Gi (Youth Aggregation Center) with the educator Michele Ricetti.

I want to thank the boys, because never as in this age is there a need for young people who go against the current, in the beautiful sense of the term, and who have the courage not to follow the mass. Mostly during the holidays and in a period of parties and leisure to put themselves at the service of the community. I thank them for the trust and commitment they have shown. If the experience went well it is certainly thanks to them says the educator Ricetti.

Prevention, intervention techniques and the fight against time in the event of an avalanche was understood and addressed, with the training and prevention day for the #Ragazziontheroad of Livigno, engaged in the role of volunteers of the Alpine Rescue and Fire Brigade.
The young people also supported doctors, nurses and operators of the Regional Emergency Emergency Company (AREU) of Lombardy, at the Casa della Sanità, to understand the importance and value of timely help - carried out by great professionals - inserted in the Unique Emergency Number 112 of which students have also promoted the "Where ARE U" life-saving app through the streets of the center of Livigno. 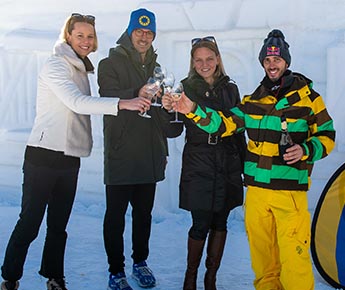 News / 31.12.2019
IN LIVIGNO CHAMPIONS FOR THE NEW YEARS EVE
Livigno is the favorite spot of the big sports champions not only for training but also to celebrate the New Year.
READ