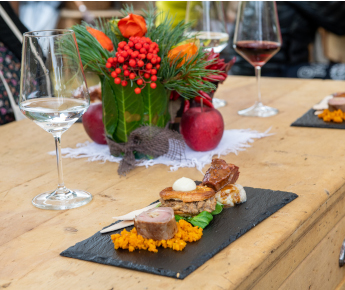 The travelling event that winds its way along a 5-kilometre route through the Vago valley area returns on 15 July. For the first time, the gourmand stops of this 'marathon of taste' will see the participation of starred chefs from northern Italy who will pay homage to their connection with the Valtellina gastronomic tradition.

When haute cuisine draws inspiration from nature, the simplicity of the raw materials is sublimated by the chef's flair; tasting the creations in the places that inspired them adds a sensory dimension that makes the experience truly all-encompassing. The date to mark in your calendar to experience it is 15 July, when the sixth edition of Sentiero Gourmet will be staged in Livigno. The event, conceived and promoted by the Association of Livigno's Chefs and Pastry Chefs (ACPL), follows a formula that is as simple as it is original: the six courses of the lunch - appetisers, first courses, main courses and desserts - are served along an itinerary of about 5 kilometres to be covered on foot, completely immersed in nature.

A unique event that this year will see the ACPL chefs working alongside five starred chefs united by their passion for natural and mountain cuisine: Stefano Ciabarri of MA! Officina gastronomica and Il Cantinone (1 Michelin star) in Madesimo, Pietro Leemann of the Joia restaurant (1 Michelin star) in Milan, Alessandro Negrini of Il Luogo di Aimo e Nadia (2 Michelin stars) in Milan, Maurizio Santin, AMPI master and director of Unica Food Innovation School, and Gianni Tarabini of La Preséf (1 Michelin star) in Mantello. Divided into groups of about thirty people, the participants will move between six dedicated stations set up along the route where each chef will propose a selection, which will only be revealed on the day of the event, of gourmet finger foods that interpret in a modern key the ingredients, traditions and typical dishes of Valtellina cuisine, accompanied by a selection of wines that are also strictly 'local'. The setting chosen for the event, which winds its way along a semi-planar route that is really suitable for everyone, is the Valle del Vago: a beautiful valley a few kilometres from the town centre, surrounded by high peaks and woods and rich in flowering meadows, small streams and pastures. An evocative and enchanting environment that lends itself to being discovered slowly, walking in company and savouring every kilometre - and every taste - thanks to the discreet presence of guides in traditional dress, who in the passages between the various stations will recount the secrets of the area and its history.

Head and heart of the event is the Associazione Cuochi e Pasticceri di Livigno (Livigno Chefs' and Pastry Chefs' Association), founded in the spring of 2001 with the aim of safeguarding and promoting Livigno's traditional culinary customs. Very active in the area, every year it brings the gourmet side of local cuisine to the stage through dedicated events. Over the years, it has promoted other important initiatives such as the publication of the book 'Leina da Saor', a project that has involved the entire community of Livigno in the recovery of ancient recipes and traditional ingredients, and the 'TAST - Livigno Native Food' project, which brings corners to hotels and flats where guests can taste traditional products made in Livigno. "Sentiero Gourmet is a declaration of love for our territory, its raw materials and its flavours. Like every initiative of ours, it brings together past and future, tradition and modernity, to convey to our guests the project that we carry out as an association and individually in our restaurants: to protect and hand down our origins, but also to grow and evolve together with them,' - comments Mirko Bormolini, President of the Livigno Chefs and Pastry Chefs Association. "The level of cuisine in Livigno is also growing thanks to these initiatives, and we are proud that this year five friends and starred colleagues with whom we share a passion for our mountains have agreed to join us in this project, enriching the tasting path with their ideas and technique and stimulating us to always give our best."

Sentiero Gourmet is a limited number event. Departures will be staggered every 20 minutes starting at 11:40 a.m. and ending at 2 p.m.; at the time of registration (compulsory) it will be possible to select the departure time. Tickets cost 100 euro per person and can be bought online or at the event office of Apt Livigno in via Saroch 1098a.
For further information: www.livigno.eu/sentiero-gourmet 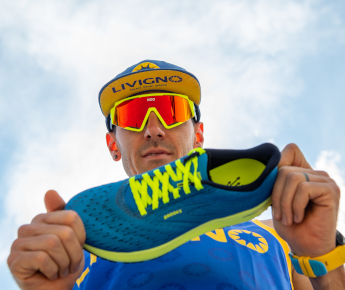 News / 1.06.2022
BROOKS IN LIVIGNO: FIRST BROOKS TRAIL TRAINING CAMP AND A...
In the capital of outdoor sports, Brooks Running launches its first Trail Training Camp open to all trail runners and prepares for a summer full of events, activities and product tests
READ