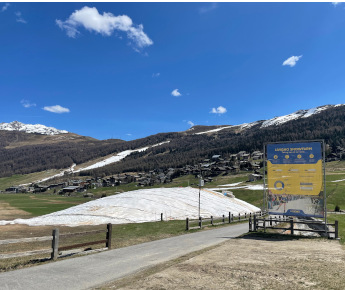 LIVIGNO, WORK BEGINS TO 'SAVE' THESNOW THAT FELL IN SPRING

Preparations are in full swing for... winter in Livigno, where operations have begun to snowfarm to store the snow that will allow the opening of the cross-country skiing season in October, after an unusual debut of snow in the village in August for the seventh year in a row.

The means of transport are in action in Livigno to collect the natural and artificial snow accumulated during the months of March and April: a white 'treasure trove' that will be properly stored at the village gates thanks to a special insulation system, will come back to light in the autumn, ready to be used for snowing the cross-country skiing ring as early as October. Since 2016, Livigno has been one of the Italian and international ski resorts pioneeringin the application of the snowfarm technique, which each year makes it possible to recover about 80,000 cubic metres of snow. A considerable amount that will rest for the whole summer under an innovative double-layer cover designed to protect it from the sun's rays and thus from the inevitable melting. This year, to improve the yield and make the operation even more sustainable, the traditional woodchip insulation layer requiring annual replacement will be replaced by a new system of wood wool mats, which are reusable and easier to apply and remove. Above this, geothermal sheets will be placed to reflect the sun's rays, further improving the structure's performance capable of guaranteeing a dispersion of less than 20% of the total mass stored.

The conserved snow will be used to prepare the cross-country track and make it practicable already second half of October, well in advance of most other alpine ski resorts. A welcome gift from amateurs and fans of Nordic skiing, but also from numerous sports clubs and national teams that will be able to start their season's preparation earlier, also taking advantage of the performance benefits of altitude training. A small quantity will be used to snow Livigno's roads as early as August. After two years of forced stop due to the pandemic, on 25 August the traditional appointment with the Palio delle Contrade and 1kShot: contradaioli in traditional clothes and traditional equipment and Italian and foreign cross-country and biathlon champions will take turns challenging each other on narrow skis along an amazing 1 km long real snow track the streets of the town centre, offering the numerous spectators an unprecedented, high-adrenaline show.

While anticipation grows for the official opening of the summer season on 11 June, Livigno is already planning the winter season, maintaining its commitment to a more conscious andmore conscious and sustainable development of mountain tourism. "Thanks to thesnowfarm technique - concludes Luca Moretti, President and CEO of APT Livigno - we can anticipate the opening of the cross-country skiing season without resorting to the high expenditure of energy necessary for snowmaking.energy needed for snowmaking. This year we will further reduce the impact of the operation thanks to the introduction of the new insulating cover, more efficient but reusable: thanks to the unceasing work of our team of snow scientists and experts, the snow season is going to be even greener. 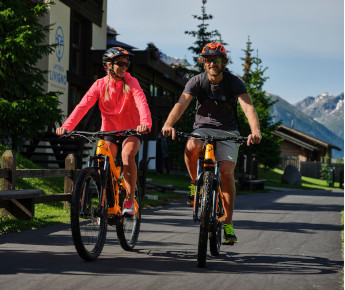 News / 16.05.2022
SUMMER 2022? NATURALLY, IN LIVIGNO!
Livigno presents the programme of events and news that will characterise thesummer season now approaching. Between adrenaline and relaxation, sport and glamour & slow shopping inaltitude, the resort is a candidate as the summer destination of choice in the Italian Alps to regenerate themind and body through direct and privileged contact with nature.
READ