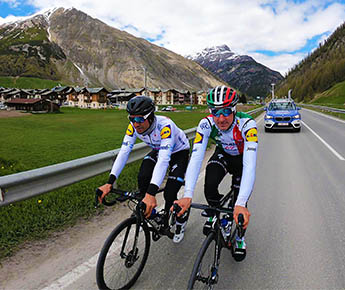 SUMMER IN LIVIGNO HEATS UP WITH SKYRUNNING, TRIATHLON, MTB, BIATHLON AND CYCLING. A NUMBER OF PRO ATHLETES WILL BE TRAINING IN LITTLE TIBET

The Livigno Skymarathon has just ended, and the summer season is coming alive in Little Tibet, a paradise for top-level training. Team Livigno’s Giulio Molinari will spend the entire summer in the village, only going away when he has races, whilst a few days ago, English athlete Simone Mitchell arrived in Livigno, an ‘ode’ as it were to altitude training.

The concept of this kind of training has developed from theory to practice and is now used by all top athletes on the planet.

David Plese from Poland and Patrick Nilsson from Sweden complete the group of triathletes. And we mustn’t forget the biathlon, either with multi-titled Norwegian athlete Tiril Eckhoff, Olympic gold medalist and four-times world champion who is in Livigno for fifteen days along with Ingrid Landmark Tandrevold and Synnøve Solemdal.

In early July, champion and Red Bull athlete Sebastian Kienle will also arrive. The German ironman is a true sporting phenomenon, having won several Ironman titles, the last being in 2014 and picking up a silver medal in 2016. Skyrunning is also a leading figure in offshore sports, and represented by Petter Engdahl in Livigno, a cross-country skier and skyrunner with a passion for photography and architecture inspired by the legendary Kilian Jornet.

Professional road bike racer Damiano Caruso and “Shark of the Strait” Vincenzo Nibali also migrate as it were to Alta Valtellina with their families in preparation for the Tour de France to be held from Saturday 6th July to Sunday 28th July. This is a compulsory choice for them in order to escape from the heat by taking refuge in Little Tibet located at over 1800m a.s.l.. A time for relaxation during which they will focus on achieving their best athletic condition before the prestigious challenges which will soon begin. The two cycling champions will stay in Livigno until the Compiano races that take place on 30th June. In the meantime, they’ll enjoy the cool Valtellina mountains without neglecting their training. Another runner who has chosen Livigno is Elia Viviani from Verona (who was up on two podiums during the recent Tour of Switzerland after the heights of Livigno). For fat wheel biking on the other hand, Canadian athlete from the Red Bull team Emily Batty - bronze medalist at the 2018 World Championships in Lenzerheide - is in Livigno to prepare for the World Cup in Andorra. She enjoys spending time in the Aquagranda - Active You centre sometimes, where Margherita Panziera will arrive in a few days’ time, gold medallist at the 2018 European Swimming Championships.


Still in the water, but this time at Lake Livigno, the Czech Republic canoeists began training a few days ago with Josef Dostál, winner of the silver medal in the K1 1000m in Rio de Janeiro 2016 and two bronzes in the K4 1000m at the London 2012 Olympic Games and Rio de Janeiro 2016. Gioele Bertolini from Team Livigno will also be present to prepare for upcoming events, including the World Cup in Andorra.

And speaking of training, there is much excitement about the inauguration of the new athletics track that will complete our sports facilities, in conjunction with the Stralivigno on 20th July, a spectacular trail running competition covering 21km,. Registration is open at a cost of 35 Euros (single) or 45 Euros (relay race) to be made by 18th July.
For further information go to www.livigno.eu 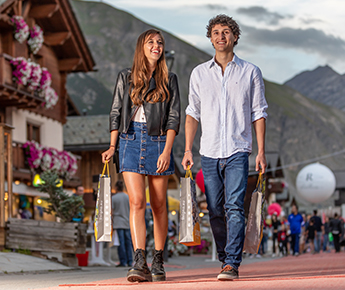 News / 20.06.2019
BARGAINS AT HIGH ALTITUDE: ADDED TO SHOPPING IN LIVIGNO...
On Saturday 6th July, the shops and boutiques of Little Tibet will be extending their opening hours for Sales Night, so shopaholics can hunt for unmissable bargains until midnight under the magnificent starry sky of the Livigno valley
READ