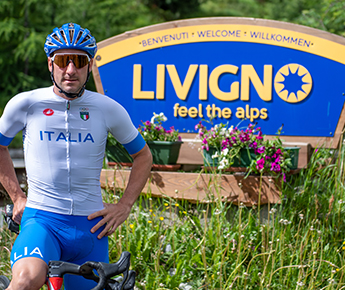 Swimming, cycling and triathlon: all the Olympic and Paralympic meals built on Livigno’s mountains.

Paltrinieri, Viviani, Quadarella and many others closed a dream-like summer, culminatingon the Olympic or Paralympic podium: the importance of altitude training.

Waiting to admire the events of the Milano-Cortina Winter Olympics 2026, where Little Tibet will host the much-awaited snowboard and freestyle competitions, the relationship between the Games and the Valtellina locations continues to become stronger. While the countdown to the winter season starts, Livigno can take stock of a first-rank Five Ring summer, topped with many Olympic and Paralympic medals that were possible also thanks to altitude training.

The list of Olympic and Paralympic athletes that chose Livigno before their Japanese performancesis really long, and it is also the best calling card to certify the quality of Little Tibet’s facilities and highlight the benefits of altitude sessions - now a must for all top-ranking athletes - once again. From swimming to cycling, from triathlon to marathons and middle-distance running: many protagonists of the Italian Olympics - the one with most medals in our history - came through here in the weeks before the Olympic torch went on.

We must start from the divine Federica Pellegrini, Livigno’s testimonial and a big fan of the Aquagrande sports centre, who made it to the 200m freestyle for the fifth consecutive edition, joining a very narrow list of Five Ring champions. To crown a perfect summer, Federica has been appointed a member of the CIO Athletes’ Commission - yet another proof of her legendary status, even among her colleagues.

Swimming has achieved other important successes, for a mission that surpassed the splendour of Sidney 2000, a true Renaissance for the Italian team. In particular: silver and bronze medals for Gregorio Paltrinieri in the 800m and 10km race; bronze medals for Simona Quadarella in the 800m and Federico Burdisso in the 200m butterfly, and a magnificent third place of Tete Martinenghiin the 100m breaststroke. The male relay racers deserve a separate mention: both the 4x100m freestyle (silver) and the 4x100m medley (bronze) saw all their athletes stop at Livigno to prepare their Five Ring assault.

Apart from the previously mentioned Burdisso and Martinenghi, there were also Thomas Ceccon, Alessandro Miressi, Manuel Frigo and Santo Condorelli.

Let’s get out of the swimming pool and onto two wheels, for the amazing Omnium bronze for the flag bearer and Livigno’s friend Elia Viviani, who confirms his 5-year podium after Rio’s triumph with an amazing recovery. And this is not the only Little Tibet registered medal: his team-mate, Simone Consonni, one of the four in the team pursuit, won a gold medal, and coach Villa’s guys also madea world record. Another Olympics to remember - although not for Italians - for the Dutch Annemiek Van Vleuten, who struck gold in the road cycling time-trial and silver in the individual race. And these successes were also built thanks to altitude training.

This is not all: many other athletes that often gravitate around our latitudes gave us a lot of emotions. From Yeman Crippa - excellent in the long-distance running - to Letitia Paternoster; From Alice Betto - seventh in the triathlon - to Giovanna Epis - protagonist of the marathon. An entire team of Italian and international athletes who chose Livigno before their Japanese Games. And they were followed by the Paralympics athletes, who replenished Little Tibet’s medal collection even further. Veronica Yoko Plebani’s gold and Giovanni Achenza’s bronze in the triathlon, and Dutch athlete Jetze Plat’s gold in road cycling.

A bellyful of medals and great performances, achieved also thanks to the benefits of altitude training, which attracts to Livigno the bests athletes in the world, both in summer and winter sports. And to launch the next winter season - with a new Olympic appointment in Beijing - the Norway cross-country skying national team - with champions like Johannes Høsflot Klæbo and Therese Johaug - is already in the valley.

Proof that there is only one great season in Livigno: the sports season.

News / 4.09.2021
GIULIO II: LIVIGNO CROWNS THE KING OF ICON AFTER A...
On the streets of Little Tibet and its surroundings, Molinari is the protagonist, who dominates the race, repeats the success of 2019 and moves thanks to the "Hour Icon" project
READ