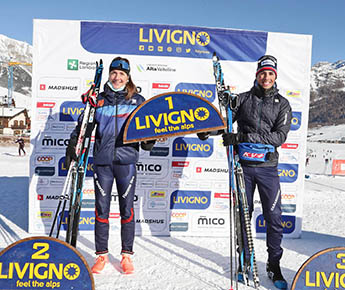 THE BURNING ICE OF HUTTER AND FANTON THAT CONQUERS LIVIGNO

Today in Livigno Coppa Italia Gamma with frozen starts and sunny finishes. 10 and 15 km skating with a wild Sara Hutter (FFOO), Fanton misses the ski and starts... running. Well deserved victory in a fabulous scenery and tomorrow there is the Sgambeda

Nordic skiing is the name given to narrow skis, the kind that everyone in northern Europe, young and old, practice, where the temperatures often change. Today in Livigno, early morning Arctic Circle temperatures (-15°), then when the sun peeped out from Mottolino everyone could appreciate the surrounding beauties, a wonderful snow and ideal slopes with a temperature even 'mild' to be in early December.
It was the morning of the Italian Cup Gamma cross-country skiing, the one that has consecrated protagonists the cold Sara Hutter (FFOO) and Paolo Fanton (Carabinieri), she from Lasa, he from Tesero.
The forecasts had predicted that it would be a very cold morning and the girls were the first to realize it, as they were the first to take to the track for the 10 km skating race in the third stage of the Italian Cup.
Chiara De Zolt, daughter of art, was the initial protagonist, she started to push from the very first laps and her attacks were answered by Ilenia Defrancesco from Trentino, with the policewoman Sara Hutter who, like a good 'diesel', lap after lap, built up a deserved victory.

She comes from the land of white gold, the marble of Lasa, and as hard as marble she held her own, answering curve after curve to her adversaries and was the first to cross the finish line, scoring her victory with 30'15"5.

A time that Ilenia Defrancesco was unable to beat, coming in at 20"9. The Comelico Carabiniere Chiara De Zolt Ponte did better, coming in at 14'4 and placing herself second. In the first three laps, Veronica Silvestri had given the idea of getting closer to the first ones, since she is used to the cold and the high ground, as a good Livigno native. In the final, however, the new financier suffered the cold, gritted her teeth and crossed the finish line with the fourth fastest time. She was a real rock too, then after the finish line she collapsed on the ground and was transported by ambulance, with a hypothermia that makes her result even more valuable, then in a short time everything was solved.
In the first five also Elisa Sordello, first of the "civilians" or perhaps better to say "non-military".

The men's 15 km skating race started in the cold and ended in the sun, but it didn't avoid the icicles on the competitors' beards and moustaches. The winner was Paolo Fanton from Fiemme, but he really risked to be out of the podium. Only at the start he realized that he had put on the wrong skis, the time to change them and get back to the start in a sprint!
However, in the first lap it was Salvadori who made his intentions clear, followed by Montello and Bertolina just a few seconds later, with the latter accelerating on the next lap and taking the lead. Nöckler noticed it too, who even though he started 30" before him, kept up the pace and then regained his advantage in the final lap. A sly Montello controlled the race, second even in the second lap, with a recovering Del Fabbro.
On the third of six laps Fanton put the arrow, making it clear to everyone that he was the man to beat. Bertolina and Montello tried to contain the escape. From the fourth lap on, Fanton, still angry after last Sunday's race in Santa Caterina Valfurva, when he finished far from the podium, got into his winning gear and was actually the first to close with a good 38.33"5, a significant time because the Molin track with its Teola climbs is unforgiving.
From lap four the positions stabilized, with Montello and Salvadori in the shadow of Fanton and in this order the race for the podium ended. Bertolina, with his frozen D'Artagnan moustache, then gradually lost ground, finishing 8th, also overtaken by Nöckler. Wooden medal for Luca Del Fabbro, who finished ahead of Sclisizzo.

In short, it was a very challenging race, especially because of the cold weather, but in general it promoted the real values on the field. Obviously happy after having "thawed out" Sara Hutter: "It went very well, it was really cold but I made it and I'm very happy, I didn't expect it. I hope this race will be the springboard for other appointments, maybe more important ones, I would like to compete in the European Cup races, the technicians will decide so we'll see."
Sara has cross-country skiing in her blood, she started skiing at the age of 7 with ASV Prad, the ski club of Prato allo Stelvio.

Paolo Fanton, having taken a breath, is obviously smiling: "It went well and I'm happy to have run a regular race, without ever overdoing it, because the track here is hard, today the snow is particularly slow and there was a lot to manage. At the start I gave myself a slight adrenalin rush, as I was about to start with the wrong skis at the last second... but apparently it helped, and it went well. The course as always was perfect, the organization is great. It's always nice to race here, even if you struggle."
He steals the words to the final comments, those on the usual perfect organization of the committee of Livigno, meanwhile machines in motion also for tomorrow, the 31st edition of the Sgambeda, 30 km of fun for everyone, big and amateurs, in the spirit of the granfondo Livigno. The start is at 11 am, with a forecast ideal for sunglasses and skiing. 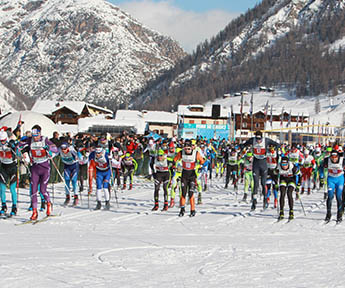 News / 2.12.2021
HALF OF A THOUSAND COMPETING IN LIVIGNOGRANFONDO STARTS...
Saturday the 31th edition with closed number and sold out The Sgambeda is the first long distance race of the season At the start also the Italian Pro Teams, there will be a lot of fun! Yesterday's champions, today's cross-country skiers: Marianna Longa and Nikolaj Pankratov
READ