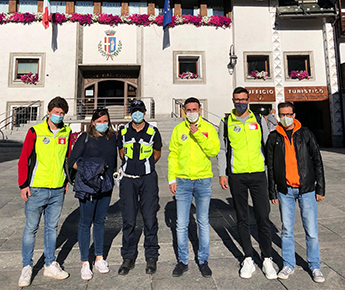 LIVIGNO, MISSION ACCOMPLISHED FOR “RAGAZZI ON THE ROAD”. THE EDUCATIONAL EXPERIENCE WILL RUN AGAIN THIS COMING WINTER

The Summer On The Road"project, which involved youngsters flanking the local police force, law enforcement agency and emergency services on the front line, also against COVID-19, has come to an end.

Mission accomplished for “Ragazzi on The Road"in Livigno. On site prevention is what the 15 students staying at the well-known tourist resort located between Lombardy and Switzerland experienced firsthand from 20th to 30th August. The on the road” project is unique in Italy and included youngsters from Bergamo, too. Its aim is to raise awareness about the dangers of the road, COVID-19 prevention and also learning about the law.

Livigno town administration strongly backed the project and really wanted it to go ahead despite COVID-19. Indeed, it put the youngsters in the shoes of the local police force, law enforcement agency and emergency services, giving them the chance to work alongside the professionals despite the pandemic, whilst still respecting all anti-contagion rules and regulations.

A meeting with the official bodies, organisations and leading figures in the sector who enthusiastically joined this first Summer On The Road” project in the presence of the press (besides local and regional, national media was also involved, with Italian television network TG1 devoting a long report to the project) sealed the success of the summer stage in Livigno which, as Mayor Damiano Bormolini stated, will be presented again this coming winter. ”Nothing’s better for youngsters than experiencing something firsthand in order to understand what lies behind a service, organising an activity or the specific requirements of an area. On The Road is an important, and indeed essential project. I strongly hope that our experience will make it clear on a national level that projects such as these, which focus on young people by bringing them closer to official organisations, are essential for their growth and development,” said Mayor Damiano Bormolini during the press conference held in the council chamber in Livigno Town Hall.

Councillor for Social Policies, Romina Galli, also expressed her satisfaction and willingness to continue with the project: “It's touching to listen to the kids talking about their experiences, and this has made us understand we’re on the right path and that this project must continue in the future, too.”

There was no lack of results, either, which clearly emerged from what those directly involved said: I chose to take part in this project so I’d learn something new, and found this experience has made me more mature, as I was able to experience the service and environment in which the local police, law enforcement agency and firefighters rescuers work firsthand. I’m really pleased I decided to get involved and deeply respect the work these heroes do,” said Riccardo. “I didn't know what to expect, but it was really nice to be able to stand alongside the local police officers, among the general public. Living their lives increased my respect for them,” concluded Pier.

Livigno’s #Ragazziontheroads understood and tackled the subject of emergency action and rescue techniques, during a day which focussed on training and prevention, by taking on the role of the volunteers of the alpine rescue service and fire brigade. I initially believed that a rescuer’s work was quite easy but there’s actually a whole lot of preparation behind it that an outsider struggles to see and understand,” said the youngsters. Samuel added: My experience with the alpine rescue team was both interesting and really useful. I’d recommend everyone do it at least once in their life, as it’s not every day you get to step into a rescuer’s shoes.”

The voices of the young people were joined by those of the various organisations that took part in and worked with them in the project, with words that were at times very touching: “Thank you…for your approach to the various organisations. You gave us so much, too. It’s great to see there are still youngsters who bravely believe in this country’s values”; “You've shown interest and a willingness to take risks"; “Congratulations kids, for wanting to experience firsthand what it means to do something for others”; “We're pleased to support this experience in order to help people understand how our mission and service work”.

The 15 youngsters worked alongside Livigno’s local police command, the Tenenza Passo Foscagno finance police, the Monopoli Customs Agency, the Livigno branch of the fire brigade, Livigno Alpine Rescue, Carosello 3000 ski slope safety, Mottolino Fun Mountain and the National Association of Carabinieri dogs. With them, there were also a few young people from Bergamo, namely staff from socio-educational association Bergamo Ragazzi On The Road. This association is the one which organises the educational project, developed 13 years ago in Valle Seriana - the area most affected by the pandemic - during a meeting between journalist Alessandro Invernici, and a local police officer, Giuseppe Fuschino. The work is promoted and coordinated by the Association, chaired by Egidio Provenzi, and active in the provinces of Bergamo, Brescia, Milan and Sondrio in Lombardy. Over the past 13 years, it has involved over 650 students, many of whom subsequently chose to become local police officers, carabinieri, doctors, nurses or emergency service volunteers, putting themselves at the association’s disposal.

Whilst respecting all the necessary rules and restrictions, the young participants in the Livigno project enjoyed experiences that went beyond prevention and road safety, instilling in them concepts about the law and the rules of civil cohabitation. From 20th to 30th August, the local police force posted them alongside officers to provide the many tourists flocking to Livigno with information, remind them to avoid crowds and remember to wear their masks and do so correctly. In this way they created a bridge with Bergamo. “The working relationship with our friends from Bergamo, who are responsible for this project, and were severely affected during COVID-19, enabled us to experience that set up again, which as always focusses on prevention,” said the Commander of Livigno’s local police force, Cristoforo Franzini.

“The young people from Livigno involved in the Summer On The Road project with the local police and other police forces, supported by Ci.A.Gi (Youth Aggregation Centre) and pedagogist/education specialist Michele Ricetti, showed they weren’t the disobedient COVID-19 infectors there was talk about recently,” said Alessandro Invernici, Vice-President of the Ragazzi On The Road Association. “We have to trust young people. It takes very little to put them on the front line, on the other side, make them understand how important prevention, safety and above all life all are,” said Invernici.

The activities undertaken by the participants of "Summer On The Road" in Livigno, as well as those experienced over the years by #Ragazziontheroad, are shown on both the website www.ragazziontheroad.it, and official social profiles of the Association: Facebook “Ragazzi On The Road”, Instagram “@ragazziontheroad”.

For media and TV information: Alessandro Invernici, Vice-President of socio-educational association for Ragazzi On The Road +39 340 3056575 www.ragazziontheroad.it 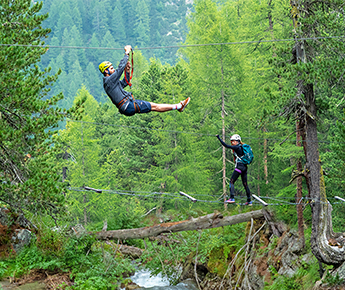 News / 6.08.2020
HIKE & MORE: 5 ACTIVITIES THAT MAKE HIKING IN LIVIGNO A...
To make hiking even more incredible, and to experience unique emotions, Livigno offers 5 experiences that combine it with adrenaline-pumping activities such as e-bike, yoga, climbing and kayaking.
READ