Attention to the national teams of snowboard and freestyle looking for Milano Cortina 2026. The partnership fits perfectly: opening of cross-country ski ring from 19th October. The goal is to support the Azures during the preparation for the most important events of the season.

An agreement, established today at Terrazza Martini in Milan, between Luca Moretti of APT Livigno and FISI president Flavio Roda during the press conference, that strengthens the link between Livigno and winter sports, electing the site of the province of Sondrio as official support of athletes in preparation for their prestigious appointments, with an eye on the Italian national snowboard and freestyle teams.

Those will take part in next Olympics Games Milano Cortina 2026 in Livigno, where there will also be the Olympic Village.

FIDAL in summer, FISI in winter: everyone chooses Livigno; so we could summarize the upcoming years. After the recent agreement reached with FIDAL that will allow athletes to take advantage of the altitude training on the new track, a new ‘active’ union is realized  immediately with the arrival – tomorrow– of the Italian national cross-country ski team led by Federico Pellegrino and the German national team, the firsts to return to the track taking advantage of a ring set up in record time thanks to snow farming and that will be 'stretched' with the passing of the days.

In Livigno the conditions are idyllic to crown the dream of perfect performance, this is demonstrated by the results of the national swim team at the recent World Cup, with the community of Livigno to be able to count on some luxurious testimonial of various sports from the extraordinary athletes of the biathlon Dorothea Wierer and Lisa Vittozzi to Michela Moioli, that in Livigno at the next Olympics will try to lower the ace in snowboard cross, up to Federica Pellegrini who uses the Aquagranda Active You Center as a training ground for her last great feat: the Tokyo Olympics Games 2020. A varied parterre in the Italian temple of agonistic training. 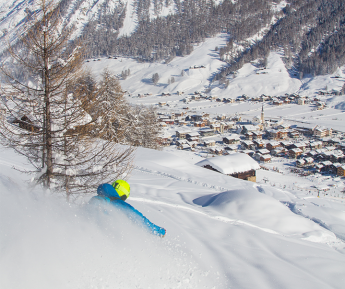 News / 17.10.2019
LIVIGNO HAS PRESENTED ALL THE WINTER NEWS 2019/2020 IN...
Starting from 19 October 2019, with the opening of the cross country track the Little Tibet will officially start the new winter season. Many news linked to sport, food and wine and green have been presented on Tuesday at bar 'Terrazza 12', right in the center of Milan, which will be featured in the winter of 2019/2020.
READ