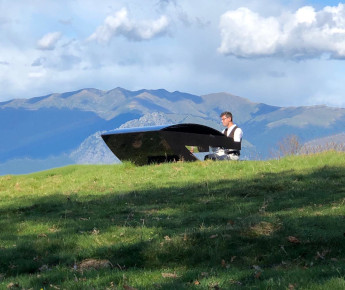 LIVIGNO WILL BE THE STAGE FOR PIANIST ALESSANDRO MARTIRE

The well-known pianist and composer chooses Livigno as the stage for his next concert,making the naturalistic landscape of the Alps even more magical

Livigno, located in the heart of Valtellina, features a breathtaking naturalistic landscape all to discover which, when combined with cultural moments, becomes even more magical.
Alessandro Martire, a well-known pianist and composer from Como and the artist chosen for the video presentation of the logo of the Milan Cortina 2026 Olympic Games, chose precisely the verdant nature of Little Tibet as the high-altitude stage of his next concert to be held on Monday, August 15: "Outdoor Mountain Concert - Apiano for Ferragosto.
"The young artist, known internationally for his very personal talent and style (a mix of classical contemporary, pop, minimalist and crossover), is in fact known for his live performances in picturesque and unspoiled, where nature and music become the two absolute protagonists.
Thus was born the Outdoor Mountain Concert project, conceived by Martire himself with the aim of paying homage to beautiful mountain locations through his own music and where the three fundamental values are the cultural, artistic and naturalist enhancement.
The combination of harmoniously played melodies and lush nature make his concerts an experience unique and evocative not to be missed, capable of bringing intense and unforgettable emotions to all audiences. His recent performances - the floating concert in the Darsena of the Venice Arsenal in June and the performance on the terraces of Milan Cathedral, where his compositions were the harmonious background to the guided tours booked for July 7 - further confirmed his success, which has also been recognized by international brands such as National Geographic and Lancôme, which have chosen his music for commercials and soundtracks.

The exciting Outdoor Mountain Concert - A Piano for Ferragosto will take place on August 15 at 9 p.m. at Vinecc, in the main plain of Livigno, right next to the snowfarm, where thesnow-thanks to geothermal sheets-while waiting for the winter season. For about an hour, the valley that embraces Little Tibet will be immersed in a magical atmosphere: the sun setting behind the Livigno mountains and, meanwhile, Alessandro Martire performing with his iconic "Waves" piano in one of three outdoor mountain concerts planned in his summer tour, which also features his tunes "Flames of Joy" and "Share the World" on the program.
International residents and visitors who decide to attend the concert will be able to meet with the group Folkloristico di Livigno at 8:30 p.m. at the Bondi bridge so that they can walk together on the wayleads to the event location, or proceed on their own. 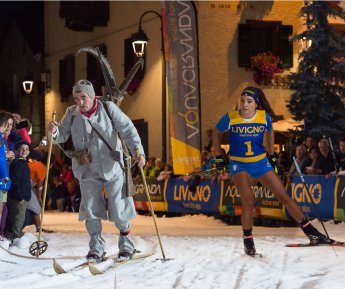 News / 8.08.2022
GARA DA LI CONTRADA DA LIVIGN E 1KSHOT: A DAY OF SNOW IN...
The streets of downtown are tinged with white in celebration of the "Gara da li Contrada da Livign and 1kShot", two ski races in the middle of downtown, which will give a taste of winter in the middle of summer.
READ